Effective biosecurity strategies are needed to prevent major and minor pathogens from causing challenges on swine farms that can lead to economic and trade impacts, as well as animal welfare issues.

Several practices have been associated with higher transmission rates of certain diseases, such as1:

Biosecurity and Antimicrobial Use

Several studies have identified that farms with a high level of internal and external biosecurity had a lower level of antimicrobial use2,3.

An emerging virus that is threatening the pork industry is African Swine Fever. Although this pathogen is a virus, and shouldn’t be treated with antimicrobials (as antimicrobials are only meant to fight against bacterial pathogens), it is of particular importance because if the potential for it to devastate the Canadian pork sector if identified in Canada. For this reason, this FAAST Review will discuss biosecurity practices in the context of ASF.

What is African Swine Fever?

African Swine Fever (ASF) is a reportable disease affecting pigs that is not currently found in Canada. ASF is readily transmitted (direct contact with infected pigs or indirectly through contact with excretions, secretions, and infected tissues, as well as consumption of contaminated pork or meat products) and leads to very high mortality in herds (100% in some cases), making it a great concern to the Canadian pork industry. Initial clinical signs are a high fever (above 41°C), loss of appetite, and lethargy. As the disease progresses, animals develop bloody diarrhea, vomiting, and abortion4. In a more chronic infection, delayed growth, emaciation, joint swelling, and skin ulcers can occur.

Remember, best practice is to investigate any unexpected or unusual increase in mortality with your veterinarian.

The global veterinary society has noted that ASF is one of the major threats to pig production, food security, and biodiversity in the world. Severe ASF outbreaks have occurred globally, with recent occurrences in Haiti, the Dominican Republic, Eastern Europe, and East Asia. The high levels of mortality associated with ASF, as well as depopulation of healthy pigs to limit disease spread has had a significant impact on pork prices, and is expected to negatively impact food security in some regions of China5. An outbreak in Canada would result in immediate significant economic and employment impacts6 due to a closure of international markets to Canadian pork, a significant depopulation of healthy pigs, and a 40-50% reduction in live hog prices to clear the market of surplus pork meant for export.

A major challenge with prevention and control of African Swine Fever is how easily it can be transmitted. Transmission routes include: direct contact between healthy and infected pigs, skin abrasions, aerosol transmission over short distances7, and ingestion of infected material on contaminated surfaces, feed, or water.

While research is ongoing, no vaccines or drugs are currently available to prevent ASF infection, further emphasizing the importance of strong biosecurity practices.

When introducing pigs into the herd several preventative measures should be put in place to reduce the risk of introducing new diseases: 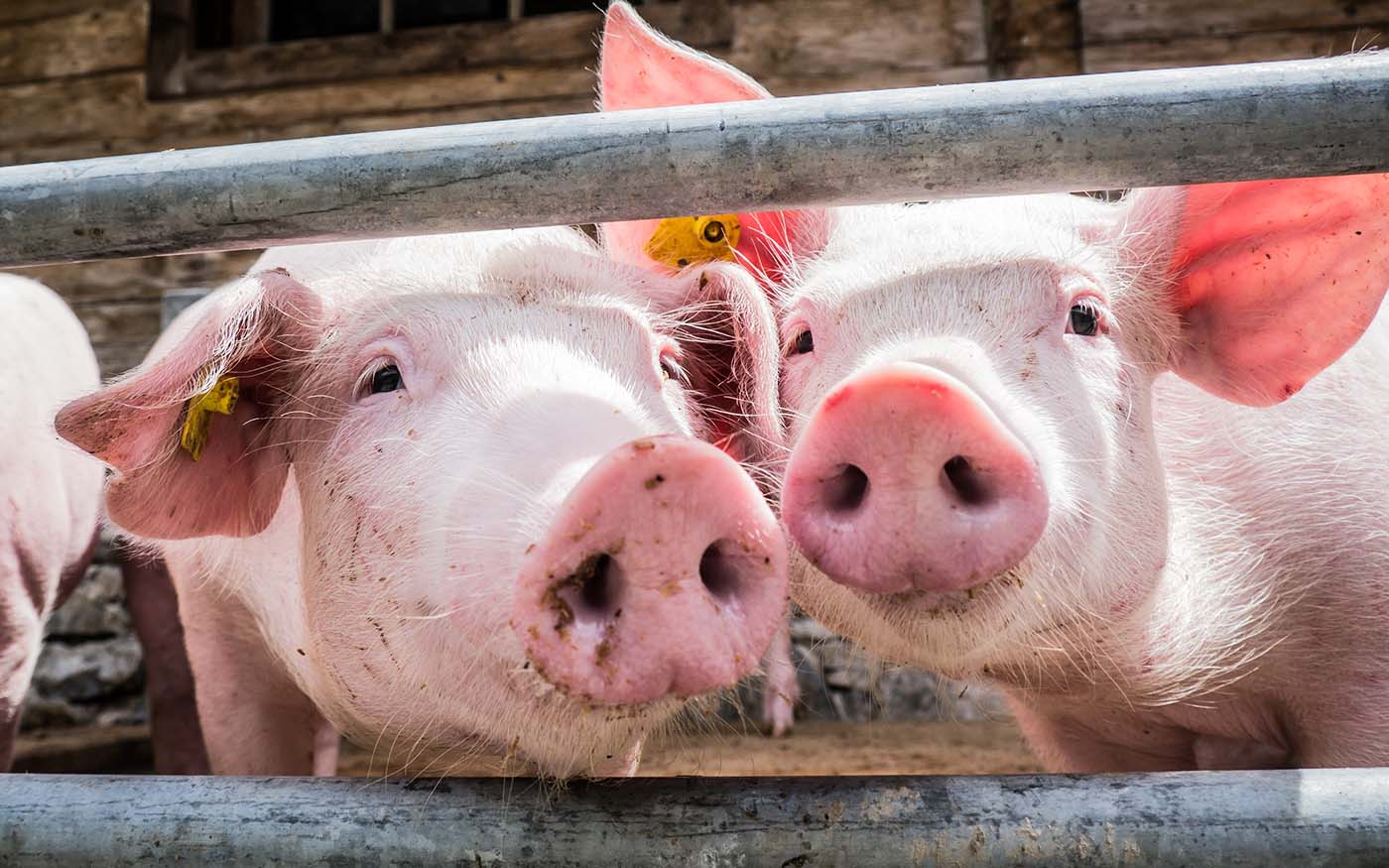 Most measures to control ASF rely on global movement of people and goods, since foreign animal diseases are often introduced through the legal, or illegal, importation of live animals, meat, meat products, and animal feed8. When considering ASF, the virus has a remarkable ability to survive for long periods in protein rich environments and is not affected by meat processing. Specifically, it is able to persist in meat for up to 6 months and can cause infection in susceptible animals that come into contact with such meat.

Avoiding the importation of infected pork tissues and meat products is critical, as it could be the main mechanism of entrance for ASF into Canada.

Producers are strongly discouraged from feeding pork or meat, as the consumption of contaminated feed (swill feeding) is a major concern with respect to ASF transmission. African Swine Fever is harmless to humans, but even a trace amount consumed by pigs could cause infection. Feeding meat, especially pork products of any kind to pigs should be avoided, as the majority of outbreaks occurring in ASF-free zones resulted from feeding food waste9.

Producers need to be very vigilant with visitors, as visits by veterinarians or advisors have been associated with the introduction of disease-causing pathogens. Humans can be carriers of pathogens through contaminated clothing, footwear, and hands. Non-essential farm visits should be discouraged, and when visitors are necessary, they should be provided with farm-specific clothing and footwear, and follow all on-site biosecurity protocols and best practices. 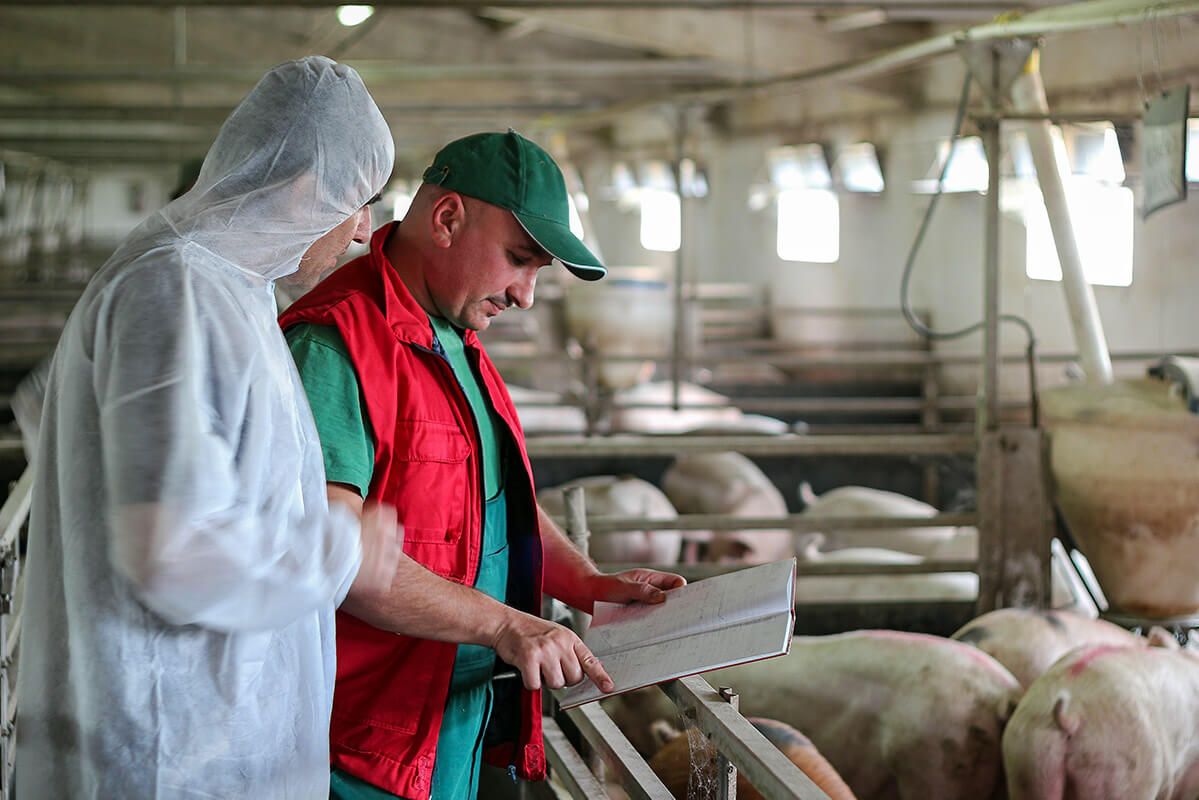 The ASF virus has a remarkable ability to survive in the environment, especially within organic material. This means that it is possible for the virus to be transmitted through contaminated clothing, shoes, equipment, and vehicles.

Drivers and their vehicles, including those responsible for transporting pigs and delivering feed or other products, represent a risk for bringing in ASF or other diseases.

Making sure that all vehicles responsible for transport of pigs are cleaned and disinfected prior to entering the farm is critical. Areas that should be included in cleaning and disinfection are the: cab of the truck, truck body, tires, loading ramp, equipment used in contact with pigs, tires, and the drivers’ clothes and boots. Deadstock vehicles represent a particular risk of disease transmission and should not enter the premises. Carcasses should be collected outside of the restricted access zone of the farm, and any vehicles that are responsible for delivering feed should unload products outside this area to avoid entering the farm.

Sharing of equipment between premises should also be avoided. All equipment that is in contact with pigs, including the equipment used for restraint, should be assigned to a single farm and kept clean. In cases where equipment must be shared, it should be cleaned and disinfected when reintroduced into the farm.

African Swine Fever is a reportable foreign animal disease, meaning that a positive isolation of ASF would lead to a rapid response by government and industry to try to control the spread of the virus. This would include the culling of the entire infected herd to minimize the risk of spread. If there was an infection in Canada, there would be a massive economic impact; therefore, it is imperative that early detection of this virus occurs.

If you suspect ASF due to unusual mortality or other clinical signs described above, contact your veterinarian or the CFIA immediately.

African Swine Fever represents a constant threat to the Canadian pork industry, with recent outbreaks in other countries highlighting the ability of this virus to spread across long distances. There is no effective vaccine or treatment for ASF; therefore, it is extremely important to prevent the introduction of this disease into ASF-free territories. To maintain an ASF-free pork industry within Canada, all parties, but particularly pork producers, should adopt the necessary precautionary measures to protect their herds.

Work with your veterinarian to ensure that your farm biosecurity program is well designed to prevent the introduction of ASF and other diseases.

Next Page | Section 6 | Biosecurity in the Veal Industry