Biosecurity in the poultry industry is the most effective and economical method to control poultry diseases, and is highly important due to increasing farm sizes and higher bird densities.

Specifically, biosecurity can support a reduced level of antimicrobial use1, and has been highlighted as a key component in the prevention of many infectious poultry diseases, including highly pathogenic avian influenza, infectious laryngotracheitis, Newcastle disease and Salmonellosis2. In addition, a recent study found several key biosecurity components that were associated with reduced antimicrobial use, including6: 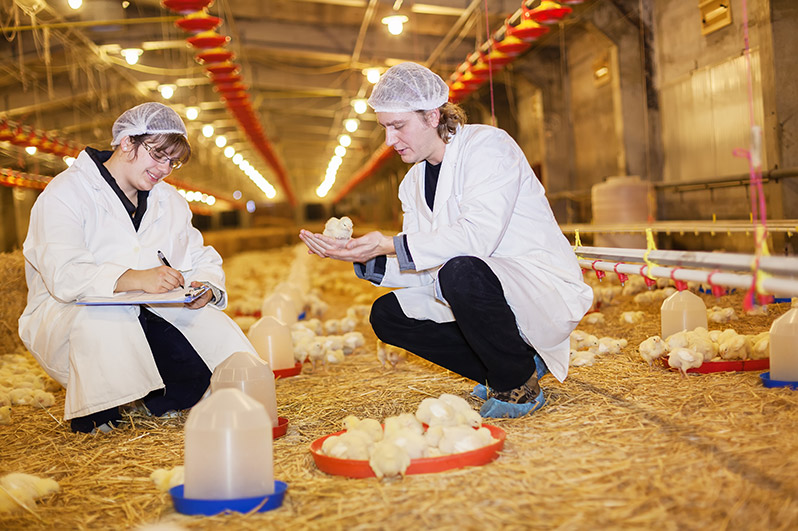 Beyond the impact on animal health, certain pathogens that are resistant to antimicrobials can be transmitted to humans. Therefore, it is also critical to reduce these bacteria through biosecurity. Camplylobacter, is one such pathogen where a high-level of biosecurity, including the implementation of farm specific clothing and boots, entry of clean feed and delivery trucks, and proper cleaning and disinfection protocols, can reduce the level of this pathogen7. Similar pathogens, such as non-typhoid Salmonella and Escherichia coli, can also be controlled through biosecurity practices which limit the chance of causing disease not only on the individual flocks but also in humans.

Despite its importance in preventing disease and antimicrobial use, some studies have highlighted a need for improvement of biosecurity in the poultry industry2, specifically with external measures.

This FAAST review will highlight components of a successful biosecurity program on a poultry farm using highly pathogenic avian influenza as an example. Although this pathogen is a virus, and shouldn’t be treated with antimicrobials (as antimicrobials are only meant to fight against bacterial pathogens), it is of particular importance due to recent outbreaks that have occurred across Canada.

What is highly pathogenic avian influenza?

Avian influenza, commonly known as “bird flu”, is a highly contagious virus that affects food producing, pet and wild birds. Avian influenza viruses are classified as highly pathogenic or low pathogenicity based on the severity of disease.

Typical signs associated with an outbreak of highly pathogenic avian influenza include3:

To best control the spread of the virus, poultry farms need to be vigilant so disease can be identified early.

The first indication that highly pathogenic avian influenza is present, is usually the outbreak of disease. Because of this, an emphasis is placed on preventing the introduction of the virus to naive farms by implementing best biosecurity practices throughout the poultry industry. Proximity to an infected farm is commonly identified as one of the most influential factors leading to infection5; therefore, farms that are in close proximity to an infected farm need to be especially diligent regarding biosecurity to protect the health of their flocks.

A unified approach to biosecurity is critical in prevention of avian influenza disease!

Wild birds are not only associated with avian influenza, but also Newcastle Disease virus, Myxoplasma, Camplylobacter, Salmonella, Yersinia, and Mycobacterium avium. They are typically responsible for introducing pathogens into an area, which leads to outbreaks of specific infection.

It is critical to avoid attracting wild birds to domestic poultry operations by closing ventilation holes with wire mesh, cleaning up feed around poultry housing, and avoiding having ponds near poultry barns to discourage attraction of migratory birds4.

Controlling wild bird populations is the most critical aspect of preventing the introduction of highly pathogenic avian influenza into a new geographic location.

Sourcing new birds from low-risk, reputable source flocks (such as the Ontario Hatchery & Source Flock Program) that use disease control programs and provide records, is encouraged. This can have a profound effect on lowering disease rates for a flock!

Humans can act as a route of transmission for different pathogens, including avian influenza. Human movement between farms has been identified as a key factor in the spread of this virus, as fecal and respiratory secretions carrying the virus can be found on footwear and clothing. High risk practices, such as not requiring farm visitors to change clothing, can be associated with avian influenza outbreaks5. Farms that require essential visitors to change clothing tend to be more likely to require other biosecurity practices, and have heightened awareness and measures to address human-related pathways of transmission for farm visitors. Time lapse between visiting poultry farms is essential. It is recommended to have at least 72 hours between visits to prevent introducing pathogens from one farm to another.

Only allowing essential visitors to your farm, who change clothing upon arrival, is an important way to prevent disease entry.

Beyond visitors, it is also important to consider farm personnel who work on multiple poultry operations. When evaluating an outbreak of highly pathogenic avian influenza on layer farms in the United States5, one key factor leading to transmission was having shared employees who would visit, or work on, multiple farms within the same day. Because of this, it is also important to implement complementary hygiene measures known to reduce risk of avian influenza infection, such as changing footwear, washing hands, and routinely cleaning barn entry areas, in addition to requiring changing clothing.

Vehicle movement between farms has also been identified as a risk factor for avian influenza, when in close proximity to bird housing. Producers are strongly encouraged to restrict vehicle access to the perimeter of the farm, or to locations that are at least 30 meters away from the barn, eliminating the need for waste or feed delivery services, personnel, or equipment to come into close contact with animal areas. Rendering and feed trucks in particular have been shown to be associated with farm infection when coming near barns. Producers can reduce this risk of infection by using on-farm methods of disposal like burial, composting, or incineration.

Sharing of equipment among poultry farms, such as shared egg racks and pallets, has led to outbreaks of highly pathogenic avian influenza, and should be avoided. When sharing equipment is necessary, the equipment should be thoroughly cleaned and disinfected prior to use.

As it is reportable as a foreign animal disease, a positive isolation of highly pathogenic avian influenza would lead to a rapid government and industry response to try to control the spread of the virus. This would likely include culling the entire flock of the infected animal to minimize the risk of widespread infection and the virus spreading to other flocks. Due to the potential of significant economic impacts on individual producers and industry, as well as international trade, it is imperative that early detection occurs.

If you suspect highly pathogenic avian influenza due to a high-level of mortality and other clinical signs described above, contact your veterinarian or the CFIA immediately.

Highly pathogenic avian influenza is a reportable disease and has previously been detected in Canadian flocks. It takes a concerted effort by the poultry industry to implement biosecurity practices, particularly external biosecurity measures, to prevent the entry of this disease into uninfected farms.

Work with your veterinarian to ensure that your farm biosecurity program is well designed to prevent the introduction of highly pathogenic avian influenza and other diseases.

Next Page | Section 5 | Biosecurity in the Swine Industry