What is American Foulbrood and How is it Transmitted?

American foulbrood (AFB) is one of the most important bacterial diseases of honey bees, causing the complete devastation of bee colonies and severe economic consequences. It is also responsible for the majority of antimicrobial use in this commodity group.

AFB is caused by the spore-forming bacteria called Paenibacillus larvae that is specific to honey bees.

It is a highly virulent bacterium that can affect any hive (healthy or weakened), spread by:

These spores are hardy! The spores produced by the bacteria can survive in the environment for long periods (well over 50 years). They are resistant to freezing and high environmental temperatures. AFB is a disease that cannot be treated, as spores are very difficult to kill.

The best way to ensure your hives are not infected is by using excellent management practices to mitigate its introduction into your hives. AFB can occur depending on the disease status of nearby beekeyards

How Does American Foulbrood Cause Disease?

American foulbrood (AFB) causes disease in hives by infecting the larval stage (particularly larvae less than 24 hours old) of honey bees. Spores produced by the bacteria Paenibacillus larvae are consumed by larvae when they are fed by nurse bees, initiating a fatal infection. New spores are produced in the body of the dying larvae in great numbers (2.5 billion per larva). Dead larvae develop into a hard scale at the bottom of the cell, and then become a source of spores that continue to infect the hive, as adult bees spread spores throughout in their attempts to remove them, and while feeding other larvae.

There are several routes by which AFB can spread among hives or colonies of bees through honey bee activity1:

Bees travel several kilometres from their own hive in their normal foraging activities (typically 5 km and up to 10 km if required). If you are in the vicinity of an infected beeyard, your hive may be at risk.

It is less likely that swarms (that have yet to establish a colony with brood comb) are responsible for the spread of AFB on their own, as most do not carry enough spores to initiate infection.

Within the colony, the stages of the life cycle and transmission of AFB-causing bacteria are outlined below1: 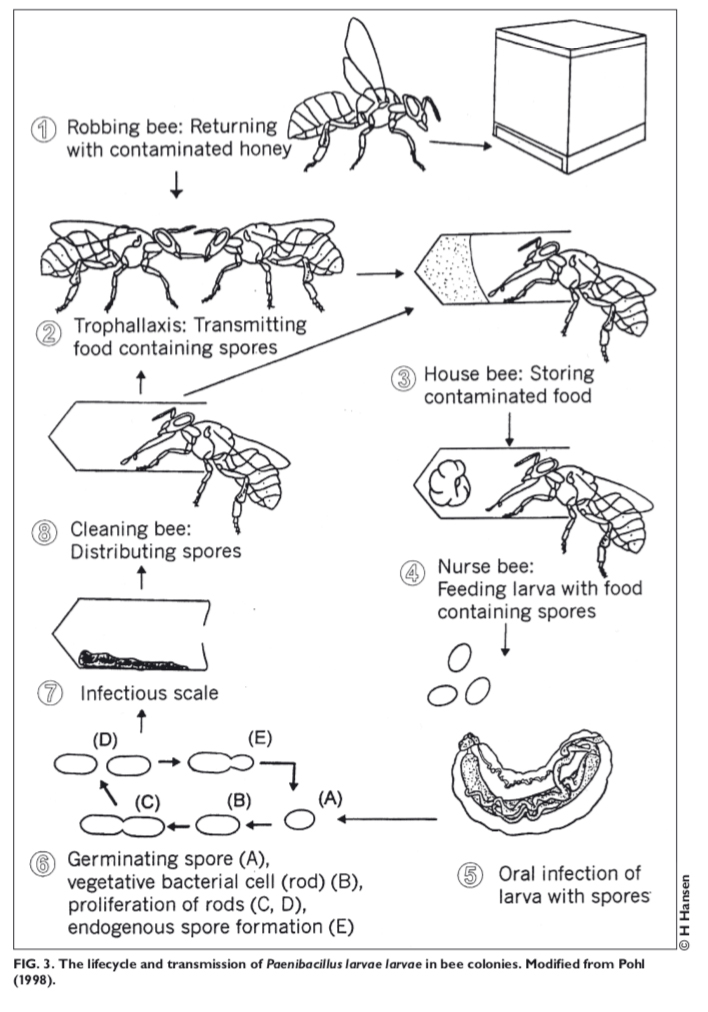 Figure: The lifecycle and transmission of Paenibacillus larvae in bee colonies1 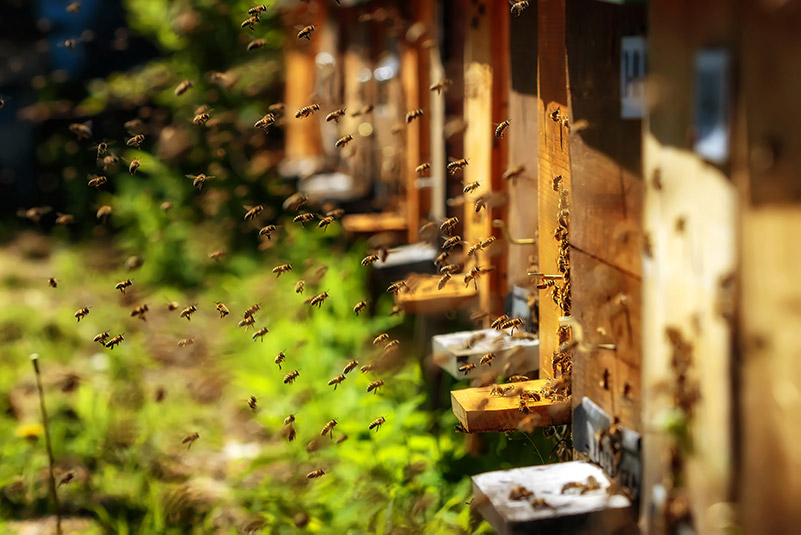 The Human Element. It is more common that AFB is spread by human intervention through the transfer of spores.

Some of the routes that beekeepers can spread AFB include:

We sat down with Dr. Greg Hawkins, a veterinarian based in southern Ontario who is also the owner and operator of a commercial hive. Greg shares his concerns about perceptions surrounding American Foulbrood, and its potential impacts on Ontario’s industry